Has there ever been a step you wanted or needed to take, but fear held you back? You’re not the only one.

One night, a few years ago now, I had the privilege of watching my adult son coax and coach my then ten-year-old grandson through a newly-developed fear of diving from a standing position.

My grandson’s fear was clearly irrational, as he and his younger sister had learned to dive on Monday, and were doing well. The next day we never made it into the pool, and by Wednesday morning, fear of diving in had somehow gotten a grip on the boy.

He would stand at the side of the pool with his sister. She would dive. He would watch. Then he’d get in position for the dive, and start talking to himself. “Come on, you can do this! You did it before. Stop thinking, brain!” It was clear that he wanted to get past the problem. It was clear that he knew his fear was not based on reality. But it was also clear that he couldn’t quite shake the “STOP! DANGER!” feeling that was freezing him into immobility at the edge.

Determined to overcome his difficulty, he sat down and dove from a sitting position, then he moved to a corner ledge in the pool and, in water up to his calves, executed a perfect standing dive. But it didn’t help. Every time he went back to the edge of the pool, he could not convince himself to take the plunge.

This continued for all of Wednesday and up until Thursday night, when my son came out to the pool. He encouraged from the sidelines for a while. Than he asked, “Do you want me to help you?”

My son went to stand at the edge of the pool with his nephew. He helped him position his body.  But even knowing he was in perfect form did not relieve the child’s fear.

His uncle demonstrated with the younger sister. “Keep your knees straight. I’m going to lean you out over the water. Don’t worry; I’m strong. Trust me; I won’t let you fall. There. Now on three I’m going to let go. Keep your head tucked. One, Two, Three.” And the girl slid gracefully into the water.

Her brother’s turn. Same routine until “on three I’m going to let go”…

Pulled back to stability, my grandson positioned himself on the edge of the pool as my son stepped back. But the same old battle ensued: “Ooh, stop it, brain! Just do it! I did this before, I can do it again.”

Many attempts later, my son finally hefted his nephew into the air. “Okay, I’m going to throw you in like a spear. Point your hands at the water.”

A brief discussion about trust ensued.

Then my grandson permitted himself to be thrown into the water, and came up smiling.

They tried the spear throw technique again, with a less lengthy discussion of trust. But being thrown like a spear and enjoying it didn’t solve the problem. My grandson still could not convince himself to dive in from the side.

Finally, his uncle walked away, saying, “For the next twenty minutes you are not allowed in the pool unless you dive in.”

Watching this, my granddaughter looked at her brother. “You’d better hurry,” she advised. “He’s going to put on his swim suit.”

My grandson stood at the edge of the pool and struggled with himself. “Ooh, just do it!”

Then, suddenly, he went in head first from the side of the pool, came up beaming, and did it again. And again, and again. Fear had been conquered. His form was terrible, but the dives were beautiful.

There’s a lesson to be learned from this:

It helps to have a coach, a mentor, and a deadline. But in the end, whether it’s diving or writing or starting a new job there is, ultimately, no secret. Only you can make yourself step through the fear and do the deed. 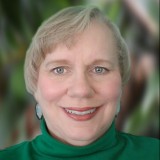